On the market there are specialized services for exchanging large files between two or more users. We are not referring specifically to P2P services, which also serve the same purpose, but to services that have cloud storage and they allow us to upload something there and then share the link, either for consultation or for download.

Google seems to want to do something similar when it comes to sending videos to other users … using SMS. Until now, the only viable way to do it was to use MMS (without looking for other more current technology) but now Google wants us to be able to share a video by SMS with anyone. And for this, Google Messages will use Google Photos as the upload platform.

The information lands directly from 9to5Google. The well-known website dedicated, among other things, to the Android ecosystem has dissected version 10.4 of Google Messages, which is currently only available on the app’s beta channel. And that is where they have hunted a new functionality included in its settings.

In this version 10.4 of Google Messages you can see an option “Google Photos” in the settings that is described as “Share videos with higher quality by text (SMS / MMS)”. It is, therefore, that Google wants use Google Photos to store videos to send to our contacts via SMS or MMS in the event that the recipient, or even ourselves, does not have RCS messaging activated. 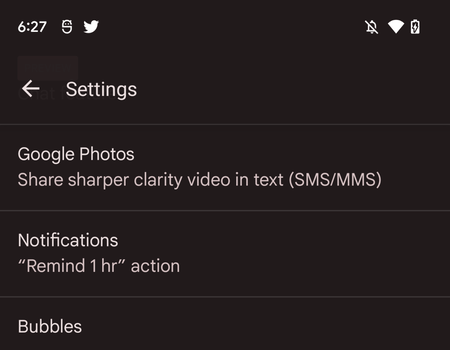 For practical purposes, it would be a solution similar to using Google Drive to share a large file, but it seems that Google wants to redirect all video content to its Google Photos platform, without going through YouTube either. We would talk in any case that the video would be uploaded to Photos and the link would be sent by text message, although It is not clear if the video would be stored temporarily or it would be available forever through said link.

Everything indicates that this inclusion of sending videos through Google Messages and using Photos it would be accompanied by the possibility of viewing the video from the application itself. As if, for all intents and purposes, the video had been sent using an RCS message. It is even possible that the video is previewed in the chat between both contacts so that the use of Google Photos is completely transparent.