We are getting used to welcoming more and more elaborate and powerful games to Android, games designed to be fully squeezed with a special controller and with mobile phones prepared for it, but fast, low-fuss games still exist. Pureya is one of them and it also has a characteristic that the others do not have, it offers us infinite quick games.

Pureya is a game that has many other games inside it and that can become our favorite companion for those dead moments in which we want to have a quick game. Or rather, a lot of fast games because Pureya proposes that we do not spend more than ten seconds playing the same game. An infinite rotation that will make time fly by. 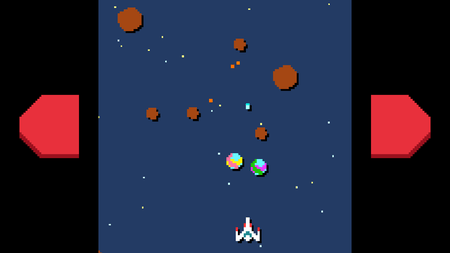 With Pureya we are faced with a container of mini-games designed for ultra-fast games. We open it once we have bought it (yes, it is paid) and we will have in front of us a small screen in the center surrounded by buttons, because the experience of the Pureya minigames has been simplified even in that detail, that of the interaction with the minigames.

Inside Pureya we can find the classic arcade from a zenith perspective in which we control a spaceship that shoots constantly, and that we will only have to move from one side to the other to avoid enemies and hit the target. We also have a simple game in which we control a pirate ship and we have to bomb a bigger ship to storm it and steal its treasures.

Another game consists of driving a car through a soccer field pushing the ball while avoiding the flags that tell us where to go. There are also platform games in which we only have to jump between them to move forward. And all this in the form of quick games in which we will have 10 seconds to advance. ¿Have they killed us? Anyway, in ten seconds we will jump to another game to continue enjoying.

As we have discussed before, Pureya is a paid game. We can find it on Google Play at a price of 3,99 euros but it certainly deserves every penny that is paid for it. It is a game of games in which we do not find payments inside, we also do not find advertising and that does not need the Internet to play, so we can install it on any Android device in the house and have a good time.