The Xiaomi Mi Box 3 TV was born a few years ago as one of the most interesting Android TV devices of that time. It is a device capable of broadcasting in resolution 4, and although it came with a fairly humble hardware, it is a solution thought to be quite long-lived.

Xiaomi is finally updating the Mi Box 3, although first in beta phase. However, these are great news, since this device had been since Android 8.1 without seeing a relevant change at the operating system level.

The Mi Box 3 already has Android 9 Pie, first in beta 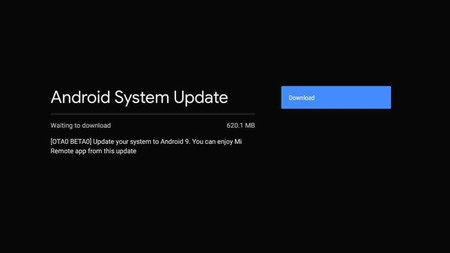 The Xiaomi Mi Box TV 3 hit the market about four years ago. The update cycle was completed when it reached Android 8.1, a version that was not expected to pass. So it was (until now), when the Mi Box 3 was updated to 8.1 there was no further news about a relevant change at the operating system levelas it had completed its update cycle.

However, as we read in XDA Developers, the Mi Box 3 is starting to update to Android 9. Of course, first in beta phase. The update occupies 620.1 megabytes. As always in these cases, there are some doubts about whether the old hardware of the device will be able to run the update well, although we can trust that Xiaomi has sufficiently optimized the software.

If you want to download this beta you can do it through the Telegram group of the Mi Box, although as it is still unpolished software it is advisable to think twice about installing itas the final update shouldn’t take too long to arrive.