Most Android phones can be classified according to their range, but in the case of Huawei phones, the best possible classification is between the mobiles before and after the veto of the US government. The mobiles after the veto do not include Google services, those before did.

To get out of the trouble, Huawei has worked against the clock to plug the holes left by the absence of Google and its services in its new terminals, mainly through HMS, its own services. This, however, leaves Huawei’s pre-veto mobiles in a difficult situation, which are increasingly living in a Google-Huawei duality that doesn’t always end well.

How we got here

Rivers of ink have flowed from Huawei, Google and Android, although the essence of the subject can be summarized in a few lines. In May 2019, the US government added Huawei to the list of entities, thus preventing US companies from doing business with Huawei. This veto prevents Google from collaborating with Huawei, so the company has not certified new terminals as of May 16, 2019.

Without certification, Huawei cannot pre-install on terminals neither Google applications nor services, and since then the only Huawei phones that have come with Google Play have been refried: certified models before the veto that have been relaunched with the same hardware and small aesthetic changes, such as the Huawei P30 Pro New Edition.

Against this background, Huawei has taken two paths. On the one hand, they began to develop their own operating system, HarmonyOS, although at the moment they have not announced any phone that uses it instead of Android. On the other hand, Huawei has had to reinforce its own services to replace Google’s.

Unable to launch new models with Google services, Huawei has had to reinforce its own services and apps. The pre-veto mobiles have the services of Google and Huawei.

Huawei mobiles already brought their own services before all this drama, but with a Western focus complementary and not supplementary to Google’s. This paradigm shift has meant that Huawei has had to add many things to HMS that it did not have before, and boost your own store, Huawei App Gallery, which is the one that comes pre-installed in the new terminals.

In this way, pre-veto mobiles are in a complicated intermediate situation, where they maintain all Google applications and services but also receive the new and strengthened Huawei services. It is an even greater duplication than other layers of personalization and that is especially evident in its stores. 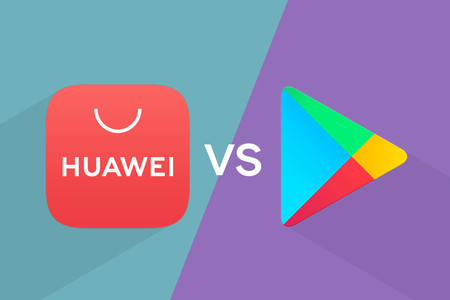 This duplicity of services is especially concerning when the two app stores: Google Play and Huawei App Gallery, they fight each other. On a Huawei mobile that has both stores installed, Huawei App Gallery is always on the lookout, ready to offer you updates for the applications you have installed, regardless of where you did it from.

On paper, the system is not bad: Huawei App Gallery checks if it has a more modern version of the application you just installed in its files. In that case, offers to update it And, in some cases, it will update it on its own without your intervention. In practice, the result is complicated.

When you install an app from Google Play, Huawei App Gallery offers you to update with its own version 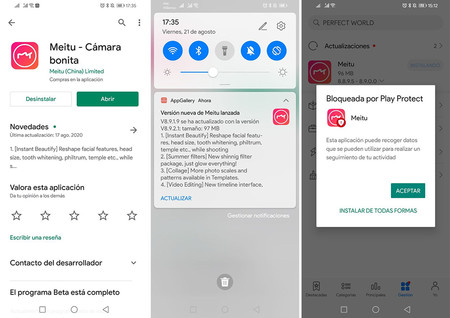 To be fair, this process is not always detrimental. Arguably, some Google Play policy changes have forced some apps to remove features in order to publish them on the Google store. At the moment, App Gallery is more permissive, so developers can publish there less restricted versions of applications.

A practical example occurs with the popular ACR call recorder application, whose version of Google Play does not have permission to read the name of the incoming call and thus organize the recordings. The version published in the Huawei store does not have this limitation and therefore includes additional functionality.

After installing ACR, App Gallery offers us the “unchained” version, which can read the names of the callers

Of course, this it’s a double-edged razor. Changes to Google Play policies, while controversial and sometimes a bit more restrictive than we would like, are often there to prevent abuse from unscrupulous developers. This is lost when the App Gallery acts behind Google Play, updating the apps with their own versions.

A separate point is that App Gallery updates sometimes don’t make much sense, offering older versions of an application that, because of the way Android works, they cannot be installed on top of it, but you must first uninstall them and in most cases lose your data and settings.

Huawei App Gallery offers to “upgrade” to a lower version

However, the biggest problem in a pre-veto mobile is the inconsistency between the store and the protection of the system, which can cause Apps installed from App Gallery do not pass the Play Protect filter. In this way, you install an application from Google Play, it is updated from Huawei App Gallery and then Play Protect blocks it. You will need to reinstall the Google Play version to use that app (or disable Play Protect).

Fortunately, it is easy to put peace between Google Play and App Gallery. In the Huawei store settings, you can disable Update notifications and Update automatically via Wi-Fi. When you open the Huawei App Gallery, you will be shown that there are possible updates to other applications, but they will not be updated automatically and you will not receive notifications on your mobile after installing apps from Google Play. 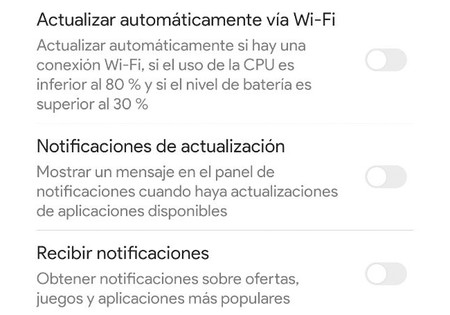 That mobiles with loaded customization layers have duplicate apps it is not something new. It has been happening since the beginning of Android, although this is somewhat more pronounced in the case of Huawei phones with both systems. Not so much for the applications, but for the services.

It is normal for each manufacturer to include their own services to manage their unique functions, accounts, synchronizations, cloud storages and similar functions. Huawei already did it before, but Huawei’s pre-veto services and those that have come after are very different. Huawei has had to include in your HMS many functions that were previously in Google’s, increasing the size and resource consumption of its services. 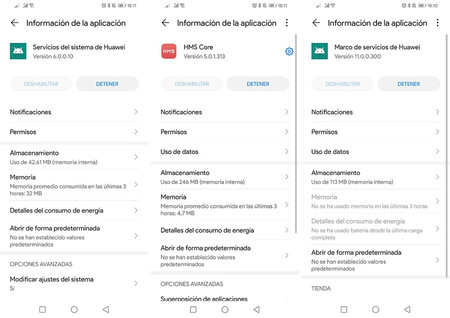 Take for example Huawei Mobile Services 2.6.5.306, the latest version before the US ban. Its APK was 67.62 MB. Going back to the present, the latest version APK, Huawei Mobile Services 5.0.1.313 occupies 94 MB, 39% more. It is not an excessive number, but it is not the only application that is part of Huawei’s services and, remember, these mobiles have Google services in operation at the same time. As of today, the Google app alone occupies about 400 MB.

Beyond storage space, having two systems that do basically the same thing also means double resource consumption. Again, it is not an excessive figure and you will hardly notice a change in a current mobile, although it must also be remembered that pre-veto mobiles already have at least one year of life and in some cases they do not have much power.