Xiaomi filed a patent for a folding device with a rotating camera in late 2019. This patent has just been approved, showing all the details of this more than striking Xiaomi proposal.

It is a vertically folding device, in true Samsung Galaxy Z Flip style. However, its greatest peculiarity is a camera system integrated in the upper part of the device, which has the possibility of rotating 360º. This will allow, on paper, have a complete camera system for both selfies and main photography. 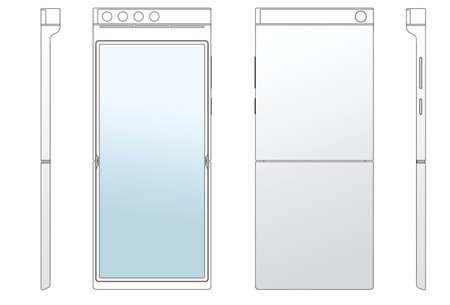 When deployed, Xiaomi’s proprietary phone displays a relatively well-used display (considering it’s a flip), without any drilling or notching, as the cameras are integrated into the top module.

The terminal folds in half vertically, as we have seen in the Galaxy Z Flip or the Motorola RAZR, something that adds to this Xiaomi patent to the list of (possible) “shell” mobiles, designed to occupy the least possible space when we have them in our pocket. The keypad is located like in most terminals, in the upper right.

The most curious thing about the terminal is the camera module, which protrudes outwards, causing the mobile to have a “bulge” at the top. This camera it is rotating as the patent shows, so we can rotate it so that it is located on the back of the device. It is curious that this protrusion module is designed to make a perfect fit when the mobile is closed, at which point it stops bulking.

As we always warn with patents, are trademark ownership records and they do not imply that such a mobile must be materialized. However, it is relevant to know that Xiaomi is registering folding mobiles, knowing that it has been working on one for a long time, especially with camera systems as curious as this one.

Xiaomi patents a curious folding mobile with a rotating camera